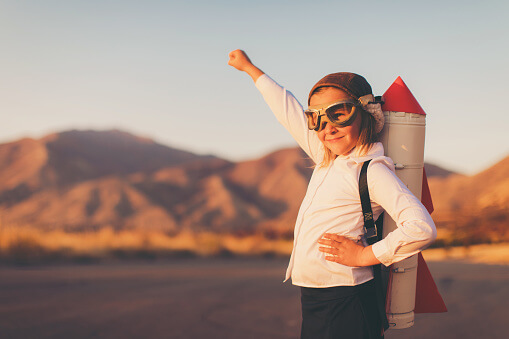 A young girl businesswoman or student dressed in business attire looks to the distance while wearing a rocket strapped to her back and a flying cap and goggles. She wants to achieve her goals.

The Female Academic in the Pandemic era

One of the best ways in life is to use humour. Choosing this path helps to face daily challenges. Especially for women who have a thousand problems to solve every day. Women, be they from the academic, research, mothers or young girls, decided to face the pandemic’s consequences for their work and family lives in this way: making fun of their days.
Being a woman during the SARS-CoV19 emergency has increased the gender gap. Suddenly, women have seen their hard-won freedoms fail. The pandemic has closed us all in our homes, establishing a wrong balance. Mothers had to struggle between children and work in rooms too small to be free. Several studies report that the COVID-19 pandemic has exacerbated the productivity of researchers who are also dedicated to family care. The results indicate a relatively greater loss of productivity for women and an increase in domestic work.

This pandemic can teach an important lesson: mothers and fathers together are facing a short-term reorganization of care and working hours. In the long run, these changes in productivity will affect careers. Those with fewer duties will have a promising and more prosperous career. Will anyone in the academic community be concerned about the imbalance between family and work? Not at all.
Continuing with the academic choice precludes the possibility of maintaining a family. A choice must be made between career advancement that requires time spent on quality scientific publications, time and ability to seek and obtain funding for research projects, or choose childcare.

In the gender-egalitarian countries of Europe, women do most of the care work, spend much more time on housework than men. So what if both members of a heterosexual couple are home? The greater likelihood is that this will aggravate gender inequality. We consider that the start of an academic career is marked by a prolonged precariousness period, which corresponds to the female reproductive period. For over a decade, there have been talks of a maternal wall, referring to working mothers’ discrimination and limitations.

Overall, COVID-19 is changing the world of research: new accelerated peer review mechanisms, the greater quantity and speed of data available and the distribution of funding between sectors are changing the balance of the academic sector, but what are the implications on the disparity?
People protest gender wage gaps. The wage gap persists among female and male Ph.D. holders. The root causes of those disparities remain unclear. One possibility is that men are more willing to negotiate for higher salaries. Some women might have to make concessions to start families, but it would be a mistake to blame all income disparities on lifestyle decisions.
Some studies have been conducted, showing that men are more likely than women to aspire to a career in academia, starting with a doctorate. Interest in both genders is high in the early periods. It’s the guys who dream of academia when they begin their PhDs, but women are more likely to end up there.
Both reports show that a Ph.D. improves overall career and salary prospects. However, the actual value clearly depends on the field of study, market demands and, for reasons still unclear, the person holding the degree. Some institutional barriers or constraints can prevent women from achieving the same level of success that equally qualified men are able to achieve.

Men can play a role. They are implementing policies such as guaranteed work leave and care arrangements for family members. Blocks that must become the subject of subsequent evaluations for career advancement and not barriers to aspirations.
How can we change this? If we are to address the academic talent chasm and the challenges of the world, we are going to need diverse brains of all varieties working together.

In honor of the International Women’s Day campaign, we underline some aspects of gender equality. First of all, women tend to be judged more severely by their students. They are more likely to be labelled “emotional” or “unfair”, and less likely to be described as “genius’”, “interesting” or “influential”. Women are also more likely to be described as “helpful”, “pleasant” and slightly less likely to be labelled as “experienced”. Women not only face academic career challenges, but they also have to fight the inherently socially constructed gender biases of their students and colleagues (both male and female). This is quite true in many social environments, especially in Academia relevance is particularly important as reviews directly influence promotions and salaries. This could be one of the aspects on which to invest to reduce the effects of gender bias in order to increase the career opportunities of women.

Recent evidence strongly suggests that team collaboration is greatly enhanced by the presence of women in the group, and this effect is mainly explained by the benefits for group processes. Having a woman in the work team, helps to make work easier and faster. The ability to organize, maintain contacts and establish new collaborations are all female prerogatives.

First, studies have shown that women are more likely to care for the collective, which means they are more likely to step in when they see a gap or ambiguity.
Second, women are less likely to carve out time during the workday to focus on their top priorities, because they feel guilty or selfish for doing so. If women take time out, they tend to give it away if someone needs it. Nonetheless, their contributions may go unnoticed.

In our ‘society of collaborations,’ it is essential to focus on gender equality, not as a necessary requirement but as a fundamental avant-garde routine.