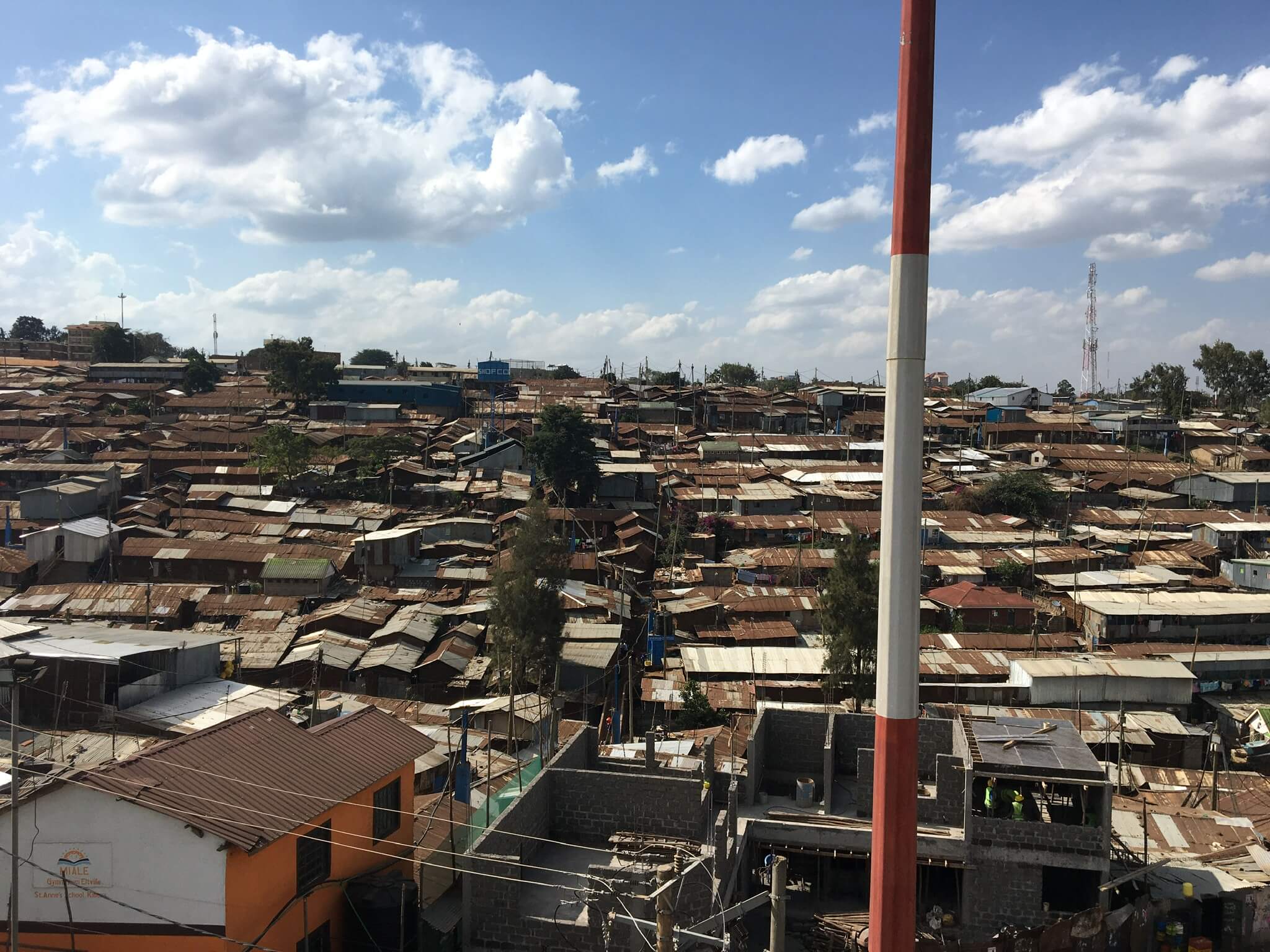 A Story of Hope in Kenya

In Kenya’s largest informal settlement, one organisation argues for a better approach to development with a focus on community.

High above the tin roofs and dusty paths of Kibera, the blue Shofco water tanks stand like beacons against a cloudless sky. For the estimated 250,000 people who live here in what is believed to be Africa’s largest informal settlement, these tanks provide the only reliable source of clean, safe water. More than this, they are symbolic of a sense of pride and hope that has carried them throughout the pandemic and, now, a cost-of-living crisis.

Shining Hope for Communities, more commonly known as Shofco, was set up in 2004 by a sixteen-year-old boy from the settlement named Kennedy Odede, fuelled by a powerful mix of frustration and ambition. What began as a small community-led movement with one small shack as its headquarters aimed at inspiring hope amongst Kibera’s people and improving their lives has now grown to a country-wide organisation located in fourteen settlements across Kenya.

Odede committed early on to a focus on women’s empowerment, having seen first-hand how the lives of women, including his own mother and sisters, were so often devastated by gender-based violence and widespread discrimination. Along with his wife, American Jessica Posner, who met Odede during her time volunteering with Shofco in 2007, he has catapulted the organisation — and its beneficiaries — to success.

After a narrow victory in August’s elections, Kenya’s new president William Ruto will have much to contend with as he faces into his first term. The East African country is still battling COVID-19 and is struggling with the current cost-of-living crisis, with inflation running at a five-year high of 8.5%. For those living in Kibera and other settlements, it is becoming increasingly difficult to get by. For many, Shofco has been a lifeline.

When I visit Kibera at the end of June this year, an indoor mask mandate has just been reimposed in response to a surge in COVID cases. I speak to Gladys Mwende, Shofco’s Chief Programmes Officer, who joined the organisation in April 2021, a year into the pandemic.

“When COVID came, a lot of long-term development projects were suspended but other opportunities came up to be able to respond,” Mwende says. Poor hygiene and sanitation facilities amidst overcrowding were already a threat to the lives of Kibera’s inhabitants and the pandemic exacerbated this.

Yet, in Kibera, it was the threat of hunger and not the virus that scared people the most according to Mwende. To combat this, Odede was invited to work with the government’s National Covid Response team to deliver much-needed cash transfers to help people through lockdowns and mass unemployment.

Shofco also provided hygiene stations across Kibera and Nairobi, with a total of around 3,000 in public places. Soap for these stations was manufactured by Kibera’s women, as well as masks and other protective equipment, providing a new source of income and empowering women. And, significantly, the pandemic generated renewed interest — and funding — in Shofco’s work.

Since joining, Mwende says the organisation has been on an upward trajectory, receiving more and more support from the likes of the Rockefeller Foundation and others. They hope to be able to expand from supporting 1.2 million Kenyans to 2.4 million by 2025.

While the pandemic provided new opportunities, the lives of many Kenyans are now threatened by spiralling costs of food and fuel. At the end of July, Kenya’s then-president Uhuru Kenyatta announced a price cut for the staple maize flour. Yet, this subsidy lapsed on August 18 and a fuel price cut is also expected to end by October.

Now, despite proclaiming himself as a “hustler” on the side of low-income voters, it remains to be seen how the newly inaugurated President Ruto will address the country’s many economic challenges and support those most in need.

World Bank statistics for 2022 show that 33.4% of the Kenyan population lives below the national poverty line. And while their April report projected a continued fall in poverty levels, it also warned of the risks that global fuel and food price shocks caused by the war in Ukraine could pose.

In Kibera alone, stories abound of cases of extreme poverty. Mwende describes a family of five children, ranging from one to fifteen years old, whose mother had left them after being unable to pay rent. Shofco stepped in, providing not only food but also training for the mother to be able to work and support her family.

Through their sustainable livelihoods programme, the organisation is able to help families like this to better provide for themselves. One of its more recent initiatives is the Shofco Urban Network or Sun which brings together individuals and families to strengthen and mobilise communities and provides micro-financing to start businesses.

Across Kibera, the sky blue of Shofco is everywhere. Denis Koech, Shofco’s communications officer, leads me on a tour of the settlement. The different programmes ranging from gender development, WASH (water, sanitation and hygiene), healthcare and a girls’ school, as well as various community centres, are easy to spot. In each blue building, there are people learning or working alongside each other.

In June, ahead of the elections, levels of cynicism are running high. Many Kiberans simply hope that a new government will provide the support needed to get through the current crisis. The low voter turnout in August demonstrated the lack of interest in the elections, with many people instead more intent on protesting food prices.

Yet, despite the ongoing challenges facing Kenyans, Shofco continues to provide hope and opportunity in Kibera and other Kenyan settlements. Leaving the hubbub of Kibera’s streets behind, the energy of the people around me is palpable. And it is this energy which has helped Shofco flourish. Powered by the individuals and families they support, the organisation’s community-led initiatives may well be the future of development.